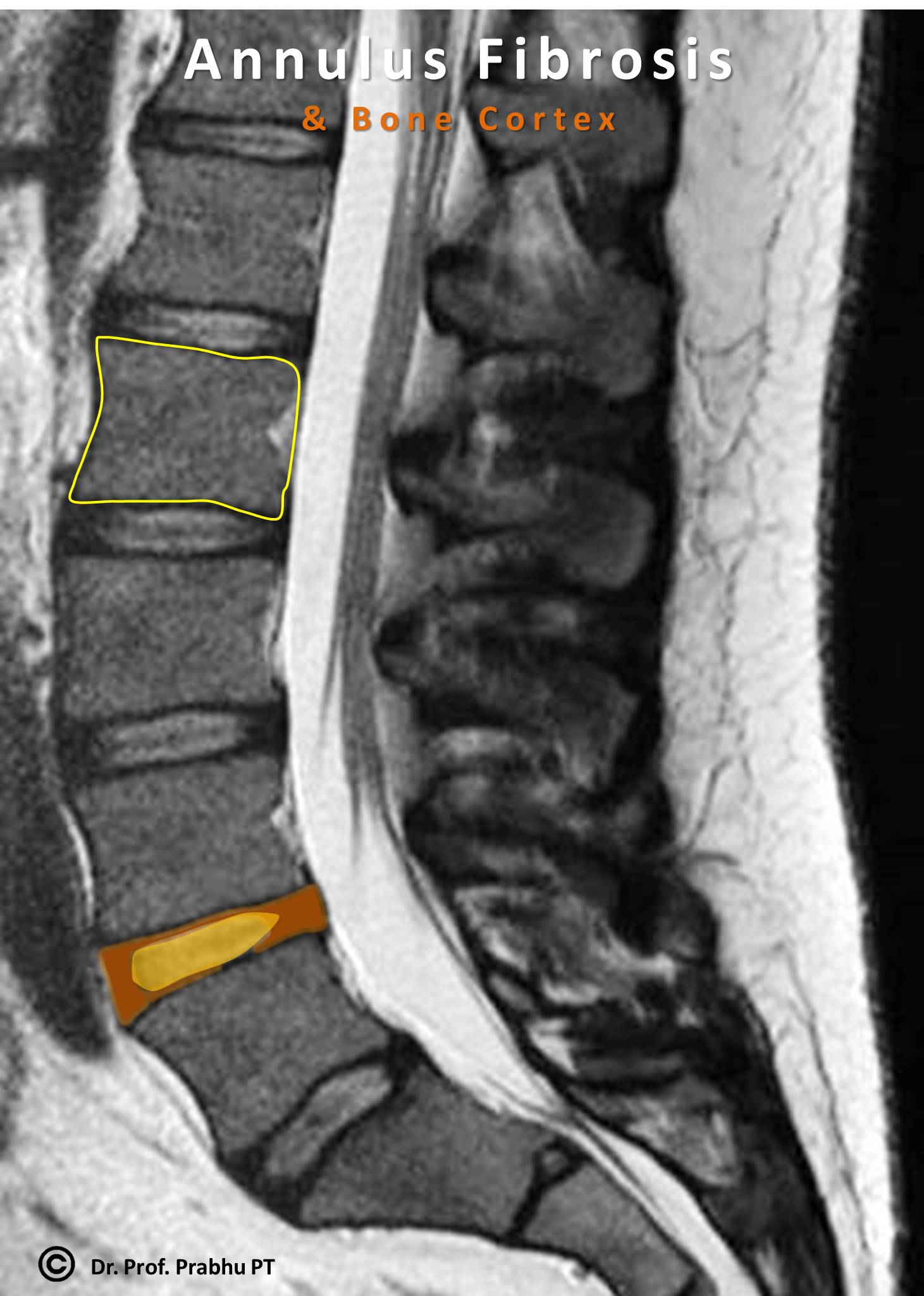 MRI protocol for identifying for nucleus pulposus and annular fibrosus is quite simple. T1 & T2-weighted images are routinely performed in the evaluation of the spine12. Basically we rely on the sagittal T1W & T2W images and correlate the findings with the transverse T2W images6.

It is easy to analyze the disc by comparing T1W & T2W MRI Images. The sagittal T1W images give you the basic picture of Intervertebral disc.

Once you identify the disc in the T1w MRI, correlate these findings with the T2W-images.

A normal intervertebral disc is described as a homogeneous structure on MRI, which is isointense to muscle (hypointense – gray) on T1W and because of the water content it becomes hyperintense (bright) on T2W images.

There will be no distinction of nucleus pulposus and annulus fibrosus in the T1W MRI. Nucleus & annulus are together visualized in T1W MRI without much of signal difference.

A well defined & distinctive nucleus and annulus may be seen in the T2W MRI. However, you may not able to differentiate annulus fibrosus & vertebral bone cortex in T2W MRI.

Cortical bone is the most dense tissue, and represents 80% of the total skeletal mass in healthy adults8. The thickness of the cortex is from subperiosteal deposition of bone.11

Cortical or compact bone is a dense tissue with less hydrogen protons, so it looks dark in all sequences including T1W & T2W. Normal adult cortical bone has a very short T(2) and characteristically produces no signal10.

A comparison between CT & MRI can explain better about the cortical line around the vertebral body.

But, Nucleus and annulus are together viewed in T1W images as hypointense signal.

The location of nucleus pulposus & annulus fibrosus can be identified with following midsagittal section of lumbar vertebra.

This explains the Para lateral location of annulus fibrosus in sagittal view, on both sides of nucleus pulposus.

The nucleus is bright, located in the centre and annulus fibrosus seen on sides of nucleus in T2W MRI.

In infants and young children, transition between the nucleus pulposus and the annulus is sharp and becomes less distinct with age7.

In young adults, disc has a low to intermediate signal on T1-weighted images and a high signal intensity on T2-weighted images relative to the bone marrow in the adjacent vertebral bodies7.

In the third decade the intranuclear cleft appears as a horizontal band of decreased signal intensity on T2 in the central part of the discs (grade II of Pfirrmann Score which is explained below), giving it a bilocular or bipartition appearance on sagittal images. It resembles a fibrous transformation of the gelatinous matrix of the nucleus pulposus7.

An early sign of aging on MRI of young adults is the appearance of intranuclear cleft, a band-like deposition of collagen along the disc equator giving it a bipartite aspect.  It shows a linear and thin transversal hypointensity, referred to as nuclear cleft. It represents collagen deposits and this finding is common in young healthy discs in the second or third decade and is a normal sign of initial ageing, but not of degeneration. A disc with an intranuclear cleft corresponds to grade 2 of Pfirrmann scale.13

In middle-aged and elderly, there is a gradual signal loss of the intervertebral discs on the T2 images until the disc become hypointense.7,12 The loss of signal is best seen on T2 and correlates to a decrease in water and proteoglycan content and increase in collagen. Though the decrease in T2 signal of the intervertebral disc is age-related it predisposes to degenerative changes in the discs such as loss in disc height, disc herniation and annular tears7.

Disc can be graded on MRI T2 weighted images using a grading system proposed by Pfirrmann 1. This classification is not used on routine spine reports, being more important for research purposes.  Normal & abnormal disc may be assessed with Pfirrmann score system for assessing lumbar disc  Degeneration:

An individual may have disc with all kind of  Pfirrmann grades. Look at the following T2W MRI, this patient has all grades of Pfirrmann’s grades except 5th grade.

With aging and degeneration the glycosaminoglycans are replaced with fibrocartilage and the collagen type II replaced with type I (same as the annulus fibrosus). In general in the normal ageing disc the height is preserved, disc margins remain regular and radial annular tears are not a usual consequence of ageing7.

The nucleus pulposus & annulus fibrosus should be analyzed in T2w axial view after analyzing on sagittal T1 & T2W.

The nucleus pulposus is the central component, located within the annulus fibrosus, which can be easily seen in the T2 weighted axial MRI.